If you’ve driven near the I-4 & I-75 interchange in Tampa, you’ve seen the huge Confederate flag. That flag is a perpetual slap in the face to every African-American in Hillsborough County. Every time I’ve driven by that flag, I’ve wondered who’s responsible. Who would go to such trouble to display such a divisive symbol?
Here’s who–Marion Lambert.
Old Marion seems like such a down-to-earth guy, doesn’t he? According to the Tampa Bay Times’ October 24th human interest story, he’s quite proud of his namesake, an ancestor who Marion says served in Tennessee under the Confederate general Nathan Bedford Forrest. In case you’re light on American history, Gen. Forrest founded the Ku Klux Klan.
Oh, but Marion’s just a Good Old Boy, never meanin’ no harm. Why he even employs a live-in African-American woman as a housekeeper. So clearly, not a racist at all.
This flag business is all about his “heritage.”
I’ve heard that same ignorant bullshit all my southern life from misguided people, often good people, sometimes people I love, who simply don’t understand the propaganda they’ve been fed from birth, the full reality of the brutal slave state the Confederacy was, and the open wounds from which our country is trying so hard to heal. 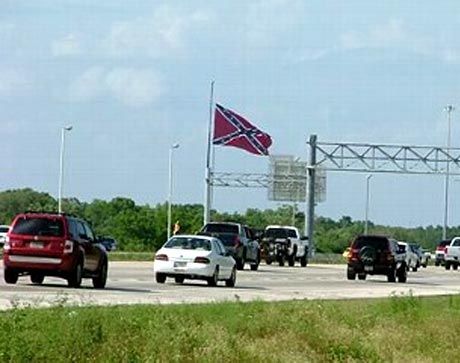 I think Mr. Lambert understands perfectly the effects of his choice to display an enormous symbol of hate in the most public place possible.
I’ve said it to myself each time I’ve driven past that damned flag, and I’ll say it here. As a white person, and a southerner, you make me feel ashamed, Mr. Lambert. I hope you have the opportunity to feel, sometime in this life or the next, the way you make thousands of our fellow Americans who are descendants of slaves feel when they drive past the hateful flag you saw fit to hoist over the busiest intersection in Florida.
I suspect you’d deny being a traitor even more emphatically than you deny being a racist. But Florida hasn’t been part of the rebellious Confederacy for a century and a half. So why not pull that treasonous flag down, and replace it with the Stars and Stripes? Many of us would thank you for getting that thing out of our sight.

One thought on “Mr. Lambert, Take Down That Flag”